In order to investigate the dependence of planet formation on stellar mass, we have been monitoring a sample of F-type main-sequence stars with the 2.0 m Alfred-Jensch telescope of the Thüringer Landessternwarte Tautenburg. This survey is based on high-precision radial velocity (RV) measurements using the coudé échelle spectrograph and an iodine absorption cell. We present RV measurements of the F7 V star HD 8673 that show a long-term variability of 1634 days with a semi-amplitude K = 288 m s-1 that can be explained most reasonably by an orbiting sub-stellar companion with a minimum mass of 14.2 M Jup in a high-eccentricity (e = 0.723) Keplerian orbit.

With minimum mass of 14.2 Mj, I reckon it's more likely a brown dwarf, rather a superplanet.

EPE lists an abstract which lists the star as having a 10-18 Jupiter mass companion in a 639-day orbit.

It was announced together HD 13189 b in TOPS program for exoplanet search, if I remember correctly.

A bit tricky since minimum mass is 14.2 Mj. Moreover orbital parameters have not been updated by Schneider. Much longer period (1643 days) and wider separation (a=2.97 AUs). And highly eccentric (e=0.72).

EPE's inclusion criteria are here, the 13 Jupiter mass limit is not rigidly adhered to.

This one might be detectable with astrometric measurements, would be interesting to know the true mass. Unfortunately I don't have access to the full paper, do they mention anything about detection limits for stellar companions?

Know The Star, Know the Planet. IV. A Stellar Companion to the Host star of the Eccentric Exoplanet HD 8673 B

HD 8673 hosts a massive exoplanet in a highly eccentric orbit (e=0.723). Based on two epochs of speckle interferometry a previous publication identi?ed a candidate stellar companion. We observed HD 8673 multiple times with the 10 m Keck II telescope, the 5 m Hale telescope, the 3.63 m AEOS telescope and the 1.5m Palomar telescope in a variety of ?lters with the aim of con?rming and characterizing the stellar companion. We did not detect the candidate companion, which we now conclude was a false detection, but we did detect a fainter companion. We collected astrometry and photometry of the companion on six epochs in a variety of ?lters. The measured di?erential photometry enabled us to determine that the companion is an early M dwarf with a mass estimate of 0.33-0.45 M?. The companion has a projected separation of 10 AU, which is one of the smallest projected separations of an exoplanet host binary system. Based on the limited astrometry collected, we are able to constrain the orbit of the stellar companion to a semi-major axis of 35{60 AU, an eccentricity ? 0.5 and an inclination of 75{85?. The stellar companion has likely strongly in uenced the orbit of the exoplanet and quite possibly explains its high eccentricity.

10 AU is the projected separation. The physical separation is given as 35 - 60 AU.

Anyway, funny thing - just last week I downloaded the Lick data for HD 8673. Seems fitting to take a quick look at it now. 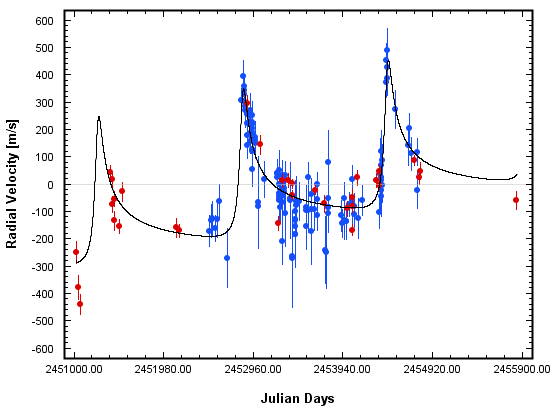 As you can see, the ~1.5 orbital cycle extension to the RV curve reveals the presence of a relatively moderate, but statistically significant RV trend of 24.0 ± 3.4 m/s/yr. This is consistent with the upper limit assumed in the paper (>|31.7| m/s/yr), and thus does not directly conflict with their modelling. For a companion mass of 0.4 M☉ and an orbital inclination of 80°, the RV trend implies a current separation of ~50 AU. This is not directly sensitive to the eccentricity of the companion's orbit, but optimistically a combined RV - astrometry model would provide some better constraints on the binary orbit in the near future.

The planetary parameters from the data are:


…Which are not much different to the previous parameters. The mass and semi-major axis are lower because I used a lower mass (1.331 M☉).

Now, to actually comment on the paper… this is now yet another high-eccentricity planet in a system with a stellar companion. The Kozai-Lidov effect (or, more generally, gravitational interactions) can again be invoked to explain how this has occurred, which would imply that the planet is aligned with the stellar orbit (i.e the planetary orbital inclination is ~80°). As I have stated elsewhere, this effect seems to be one of, if not the only dominant methods of producing highly eccentric planets, and this discovery supports that idea.